We got chickens!  I can’t tell who is more excited me, or Emma.  She has declared herself their adoptive mama, and watches them CONSTANTLY.  Jack is also really great with them.  He reaches in to touch them, but doesn’t actually touch them.  It is very cute.  And the little babies are cute as well! 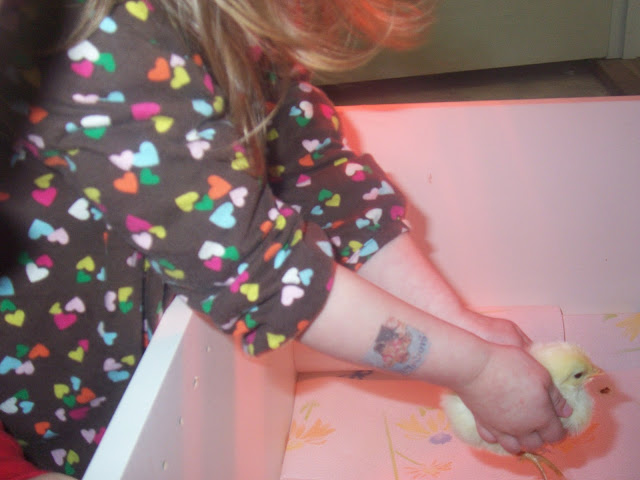 If you recall my post from last week, I had all of these grand ideas about how many chicks we would get, what breeds etc.  Well, some of my wonderful readers gave me much to think on, and we scaled back a bit.  We ended up getting 6 chicks from the tractor supply store.  They are mixed breeds, but the breeds that were on the list were all ok with me 🙂  I brought my Keep Chickens! book, so that definitely helped.  We also ordered 4 araucanas from a feed store.  So that will be a total of 10. 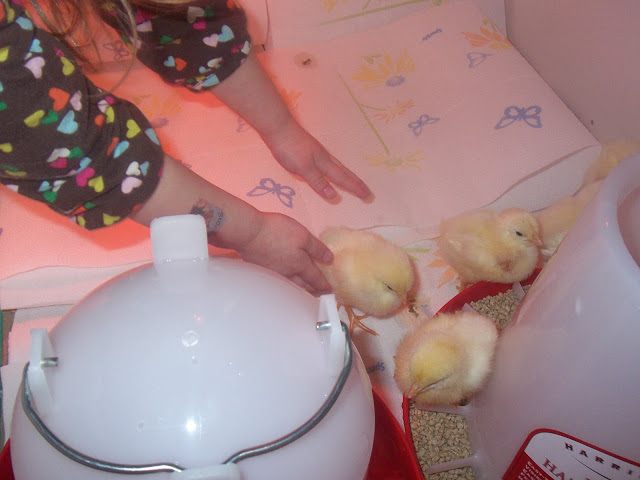 I think that 10 is a good number for us to start with.  And after having them for one whole day, we (including my husband) have deemed them the most enjoyable and easy pet.  Although, they do definitely poop a lot.  I had read that, but I guess I didn’t expect as much as is actually there!  Matt has said “I now know why everyone used to have a few chickens, even if they didn’t have a farm.”  That made me happy. 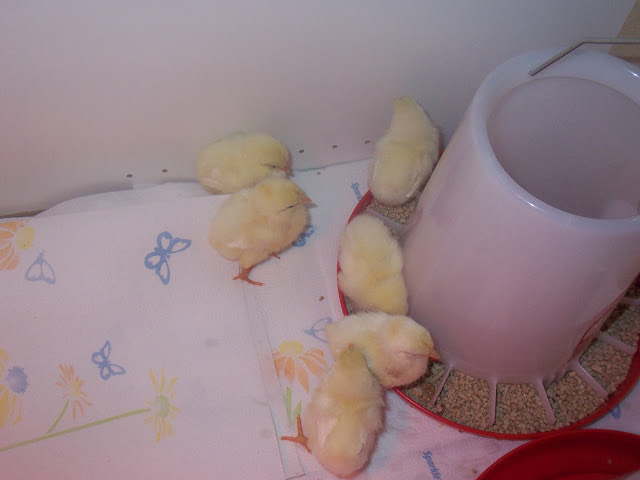 We are now considering meat chickens.  I am not at the point where I want to butcher them myself, although I think over the years I have become a lot less squeamish.  The part that scares me the most is not the killing, it is the cleaning out, and the fear I have of messing it up and ruining the whole bird.  So, if we do end up getting meat chickens, I think that the first time around we will bring them to a butcher. 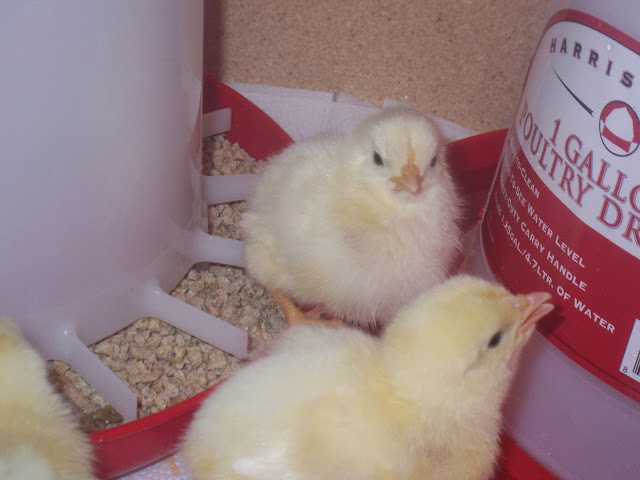 I was slightly unprepared for bringing the chicks home from the store.  I don’t think Matt and I expected to pick them up just that second, but Emma was in love…and the fact that they were selling out fast, I knew we needed to get them right then.  We drove home blasting the heat in the car, and almost passing out from all that heat (it was kind of warm outside as well). 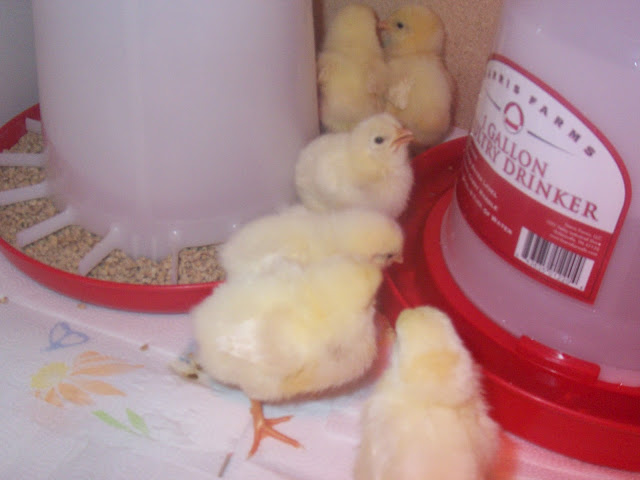 When we walked in the house we were trying to figure out where we could put them.  Did Matt have time to build a brooder right this second?  Nope.  Instead, I happened to see an old shelving unit I have had since I graduated college…a while ago.  Well, if you lay that baby down, it is the perfect brooder, and has a shelf in the middle that separates two sides, so if we need to separate the new chicks from the older chicks, we can. 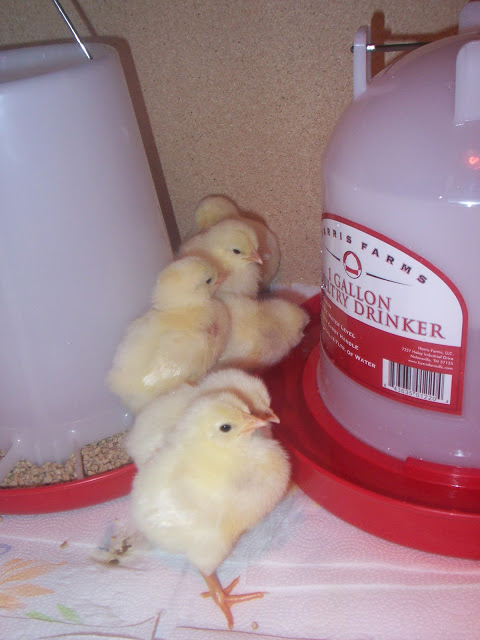 I ended up putting some linoleum down, which is very easy to clean.  And then I put paper towels down for them to walk around on.  When we picked them up, they were in pine shavings, but I read that they shouldn’t be in pine shavings for the first week, at least until they know what is food and what isn’t.  So I decided to just put the paper towel down for the week, and then I will change over to the pine shavings. 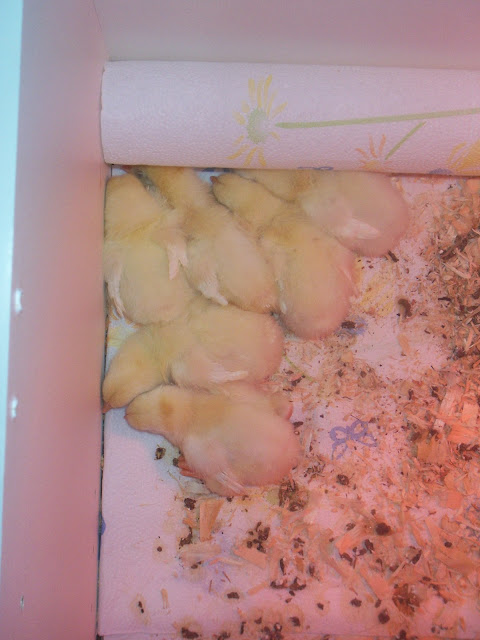 Now I need to figure out what a good chicken feed is.  I picked up what they had at the store, but I have been thinking about what they should be eating, and I want them to be eating healthy, organic, non-gmo food.  Eventually I would like to be feeding them mostly what is available from the garden and yard, and supplementing with chicken feed.  I wonder what people did before there were feed stores?  Any ideas?  And what a perfect time to get baby chicks, right before Easter!  Now we just have to wait until the end of April to pick up our 4 little easter eggers, and then we will be in business.  I am curious as to whether I can put the new chicks in with month old chickens, or if that is a bad idea?

I am linking up with the barn hop again!  Thanks for all the encouragement with the baby chicks!

Living the good life! Prepping for the new homesc