I am making soup again.  It is time for me to move from salads to soups and bread.  It is so comforting to be able to put a pot of soup on the stove to simmer all day.  Not to mention it warms up my house a bit, since we are freezing our buns over here (heat isn’t on yet, by the way).  Veggie soup is the most basic soup to make, you can use any veggies you have on hand, it is great to use with root veggies, frozen veggies, canned veggies, anything works.

First, I start early in the morning with making my veggie stock, or I pull some out of the freezer if I happen to have some in there. 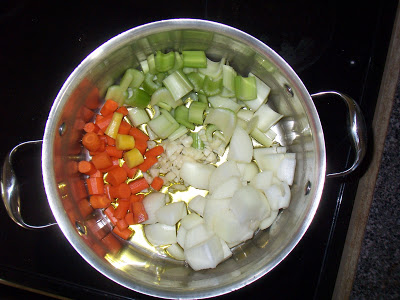 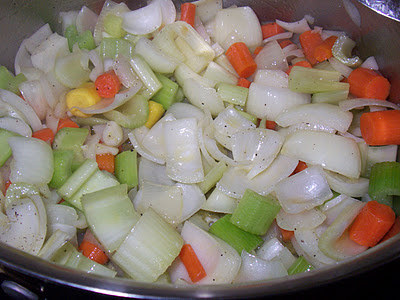 Put enough olive oil in the bottom of a large stock pot to cover.  Chop up your garlic and veggies and throw in the pot.  Saute for a few minutes.  Then add in 4-5 quarts of water.  Let it simmer away for several hours.  I only season with salt and pepper, because I tend to use different spices for different soups.  I know a lot of people put bay leaves in their stock, I don’t and never have, mainly because I don’t have bay leaves 🙂  Once the soup stock simmers for a few hours, taste it and add more salt and pepper if you need it.  Then you can either strain out the veggies, or use a stick blender and just blend them into the stock.  I always blend them because I am too lazy to strain, and I like the texture 🙂 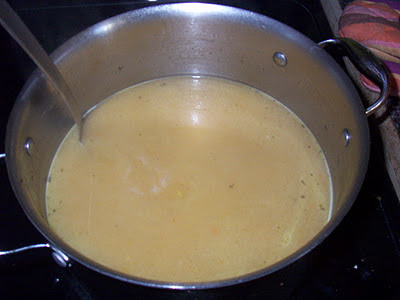 This is the base for my soup.  At this point I typically fill a couple quart containers and stick them in the fridge to cool, then put them in the freezer for use at a later date.  Make sure you leave enough head room if you are using glass, so you don’t have an explosion in your freezer!

To the base today I am adding a quart of crushed tomatoes, frozen corn, frozen peas, frozen peppers, leeks, and celeriac.  I throw all the fresh veggies in and cook until they are soft, then I add in the frozen veggies at the end.  Season with red pepper flakes, parsley, and more pepper, and you have my veggie soup 🙂  I am also making some rice to put in the soup.  Because I am planning on freezing some of this soup I am not adding the rice to the soup, I am cooking it separate.  But, you could easily put the rice in the soup to cook, just watch the liquid level and add more water if you need to.

Do you have a favorite soup recipe?  I would love to hear how you season your soup too.  I am pretty basic with the salt and pepper since I have so many veggies that flavor the soup as well.

I had a really nice time celebrating turning 40 ye