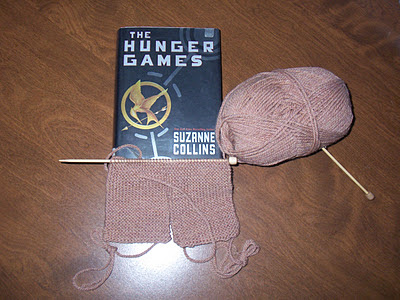 This week I started The Hunger Games.  OK, lets be honest, I read the majority of it during an extra long nap the kids took yesterday.  And then I finished it last night, just to find out that there is a second book and a third.  I guess I have been completely behind the eight ball on this series.  I have heard some say that it is the best thing since Harry Potter – I’m not sure I would say that, but it is a very good book.  The story sucks you in, and it is passionate and there are some definite sad parts to it, enough to have tears in my eyes at least – although that isn’t saying much with how big of a sap I am.  When we had gone out with my old boss and his wife a few weeks back she mentioned this book and thought I would like it.  So I put it on my list to read.  Then when I went to see Breaking Dawn Part 1, there was a preview for the movie version of this book that is coming out next March.  And actually, the preview seemed a bit disturbing, especially because I hadn’t read anything about the book plot, just that people liked it 🙂  So now I have to figure out how to get my hands on the next book in the trilogy, and I guess I better start reading more about what I am reading before I start reading it!  Not knowing this was a trilogy really bit me this time, since now I will most likely have to wait weeks before I can get the second from the library, and I am kind of tied up with money for Christmas these next few weeks!
And as for my knitting…well lets just say that I considered taking a picture of the PILE of unfinished projects that I keep plugging away at.  But, I decided to start another something new 🙂  So I started working on a doll for my son.  I wrote about this before in here.  I have decided that it isn’t going to hurt my son to have a doll, and he wants something to cuddle anyways 🙂  Plus, now maybe my kids will stop fighting over Emma’s doll. 🙂
I’m linking up at the yarn along again this week!  Maybe I can find another project to start in my short couple of weeks before the Christmas parties start!

It's time 😊 Jack got me this awesome mug last